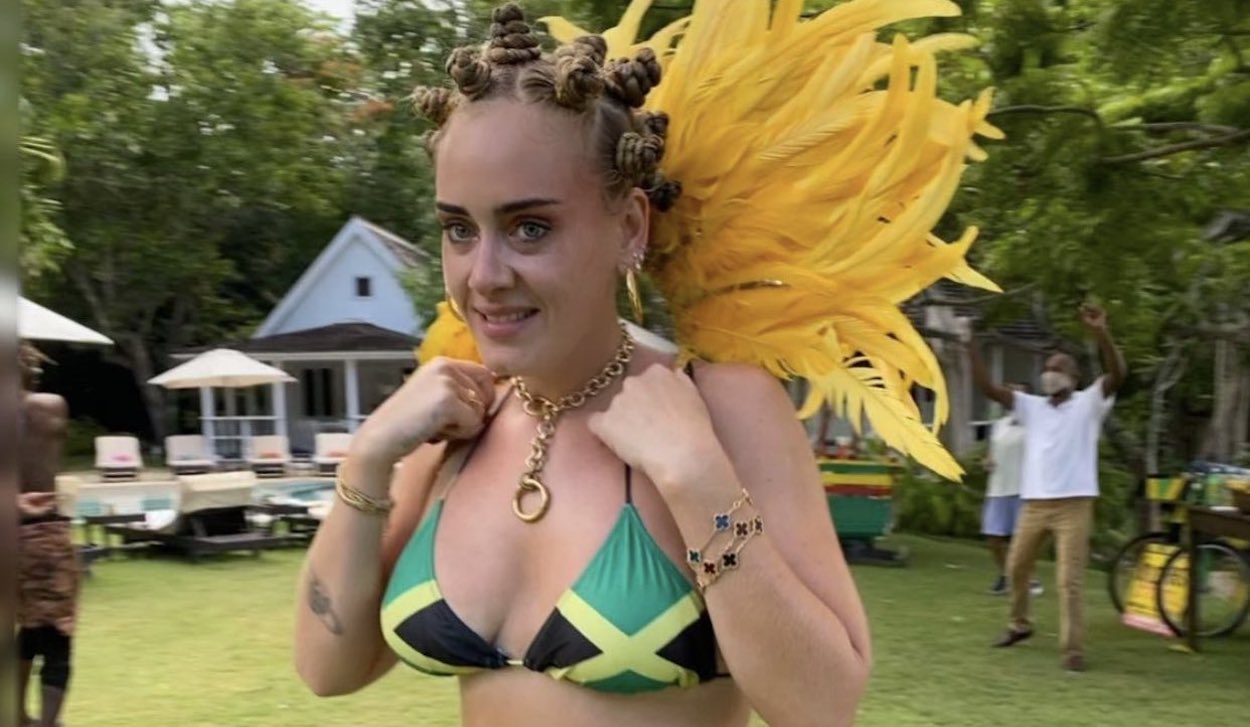 Adele went viral while showcasing her snatch body, but some folks are accusing her of cultural appropriation.

British crooner Adele is currently number one on the trending list, however not for the typical vocal prowess. The songstress doesn’t post much these days, but her recent photo just about broke the internet and might have tongues wagging all week long. She showed off her snatched new figure rocking a Jamaican print bikini top, Bantu knots, and yellow feather collar in celebration of Nottingham Carnival weekend. “Happy what would be Nottingham Carnival my beloved London,” she wrote, adding both a British Jamaican flag at the end of her caption.

UK consumer magazine Time Out calls the festival a “large street party of dancing, music and masquerade that flashes by in a blaze of feathers, Red Stripe” and pulsating rhythms. Its cancellation due to COVID has devastated revelers everywhere, and even dancehall queen Spice shared throwback footage from last year’s fete. The internet wasn’t here for Adele’s cultural display, however, outraged by what many claims is cultural appropriation in her hairstyle and dress.

Within an hour, Adele’s Instagram post pulled over 30,000 comments, the majority of them bashing her Afro-centric choices for the Caribbean community rave. “Ok for everyone who doesn’t understand. That [sic] reason people are angry is because black women have been judged by their hair for years, but when I [sic] white woman does it she is praised for it. it’s annoying and unfortunate. So yes it’s offensive.”

Another incensed internet user said, “This is not culture appreciation because Bantu Knots originate from South Africa, by the Zulu tribe. This is not acceptable, there’s boundries. We have been teased and mocked for years and years by the very same race that is now allowed to rock these hairstyles “fashionably” today.. STOP!! Stop stealing from my culture when it suits you yet be silent when we fight for our culture. It’s not okay.”

Interestingly, however, this isn’t the singer’s first time paying homage to Notting Hill Carnival or standing up for black culture. She’s attended the event in the past, and when her 2012 parade plans fell through, her ex-husband, Simon Konecki, threw her a surprise Caribbean-themed party. She’s also spoken up countless times for black struggle, most notably in her 2017 Grammy acceptance speech where she felt Beyonce was deliberately snubbed for Album of The Year for ‘Lemonade.’

More recently, Adele has been vocal about George Floyd’s heinous murder, saying, “George Floyd’s murder has sent shockwaves around the world, there are countless others that haven’t. Protests and marches are happening all over the globe simultaneously and only gaining momentum. So be righteously angered, but be focused! Keep listening, keep asking, and keep learning!”

Aside from those who feel she needs to “keep learning,” plenty of fans and netizens are in awe of the “Hello” crooner’s incredible transformation. It’s worth noting that not a single Jamaican or Caribbean national is complaining about the tribute. They were overwhelmingly supportive, in fact, with one male fan cheekily stated, “I’m tryna give @adele this #beefpatty nd das a fact.” Another added, “As a Jamaican “I’m not mad, me love Adele sad song dem and me love the free Jamaican promo.”

Another impressed fan aptly wrote, “My Caribbean (Trini) self rel confused as to why these nosey ass Americans tryna butt into Caribbean ppl business as if they have a say? Carnival is meant to be shared with the WORLD, calm yourselves & realise that there’s a difference between cultural appreciation & appropriation. Adele, you’re doing amazing! (Although that backpack real not cutting it lol, come to Trinidad we’ll fix you up)”.

It’s unclear whether it’s a throwback post or current happenings as an onlooker in the background was seen donning a mask. Adele is most likely surprised by the response too, which has the Twitterverse joking about her reggae album dropping before Rihanna’s and likening her new image to Katy Perry. Still, according to event organizers, the festival is a “celebration of Caribbean heritage, arts, and culture, representing the resilience and cultural diversity of the communities of London,” and it truly seems Adele was only showing some support from the other side.