Beenie Man Touch Down In Ghana For Bhim, Says “Stonebwoy Is My Son” 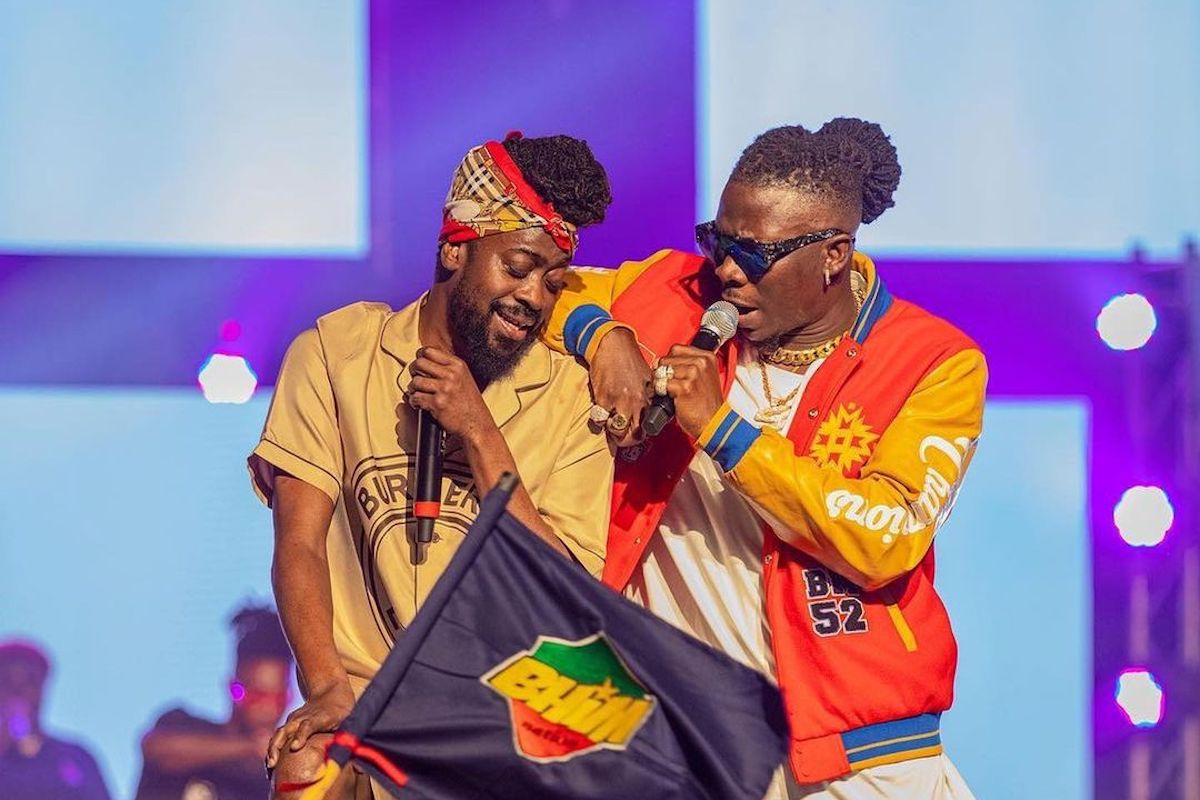 StoneBwoy and Samini beef is dead thanks in part to dancehall legend Beenie Man.

It appears that Beenie Man can now check mediator off his bucket list of career options as the dancehall legend reunited two Ghanaian nemeses at the 2021 Bhim Concert on Tuesday. He subsequently ended a year-old feud that had both men at each other’s throats, which had turned once good friends into foes. However, it was all smiles and joy for patrons when the King of Dancehall invited StoneBwow and Samini to come onto the stage at the Accra International Conference in Ghana’s capital city.

In what now seems inconsequential and petty, the feud was sparked by StoneBwoy’s acceptance of an Asaase Sound Clash lyrical battle with Shatta Wale, who is reportedly Samini’s number one arch-rival. In a series of not-so-nice rants on Twitter, Samini made his disappointed feelings known publicly, and StoneBwoy decided not to be the bigger person and ignored his hurtful comments. Instead, the Afro-pop musician hit back by calling his former friend a “sell-out,” and it was all downhill after that in terms of trading barbs and insults.

Samini, a Ghanaian reggae and dancehall recording artiste, had expressed in a radio interview done earlier this year that he felt blindsided by how StoneBwoy had dismissed what they had built together and that his actions were a slap in the face and a direct violation of their friendship. “If I hear you on the radio saying that I’m not there for you when you needed me, it hurts. It makes me sit and break down. How did I sell out StoneBwoy? If Ghana can answer me. Those were the things that hurt me,” he stated. 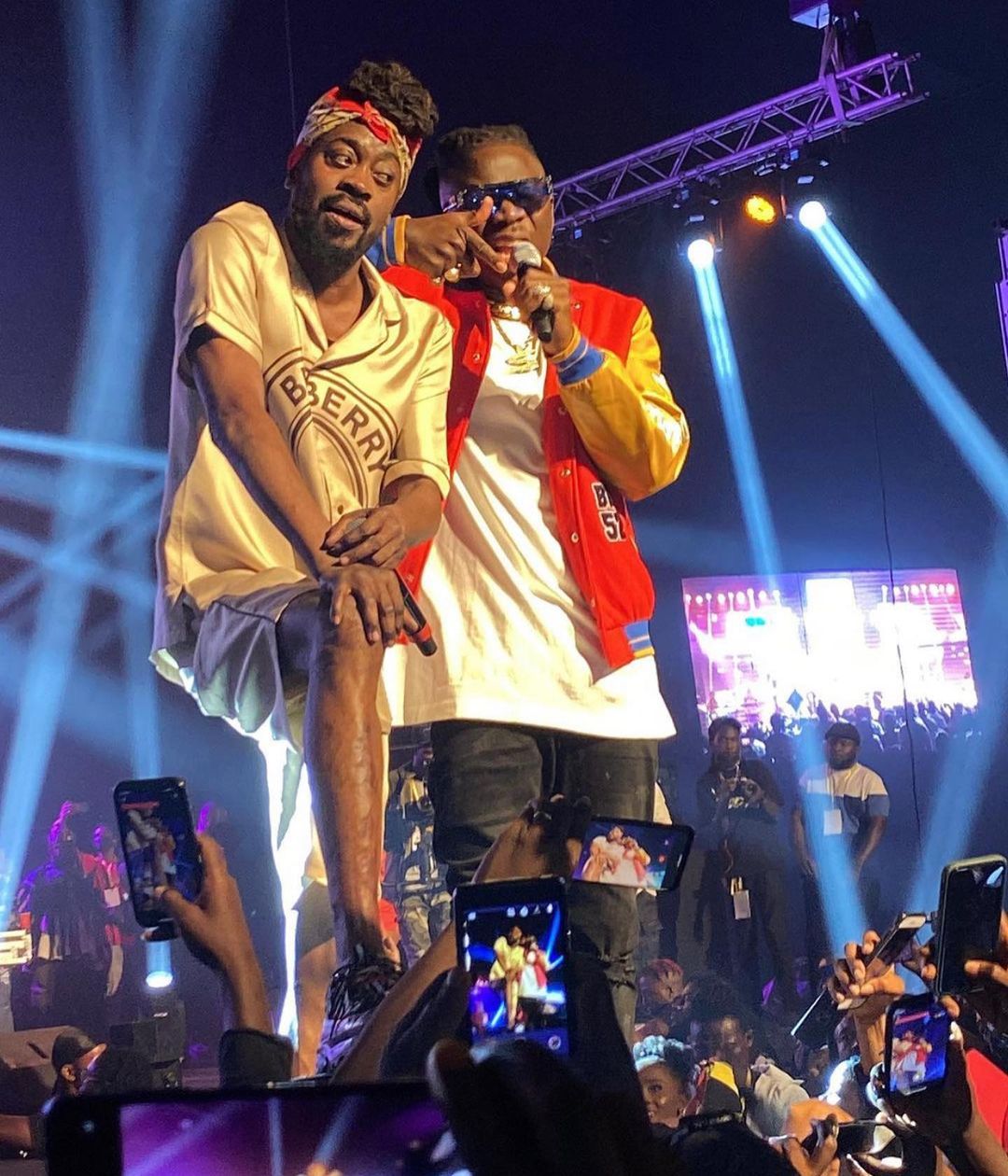 It seemed to many that the friendship between the men was over. Still, it took an upcoming birthday and the efforts of the dancehall doctor from Jamaica to put in an appearance at the much-publicized concert and write a prescription that called for peace to reign and friendship to be rekindled. The crowd truly appreciated his efforts.

Dressed in all white, like a dove, Beenie Man went into his chart-topper “Rum & Red Bull” and was being his usually energetic and playful self during his set. StoneBwoy then joined him on stage for “Girl Dem Sugar,” with the two were freestyling lyrics and having fun during their set. Then out of seemingly nowhere, StoneBwoy announced that he was wishing his big brother a happy birthday,

He goes by the name S-A-M-I-N-I! Are you ready for the brother Samini?!” and the crowd erupted in cheers when Samini ran out with his microphone. The two began freestyling on the same “Girl Dem Sugar” rhythm, with Beenie Man surrounding and cheering the long-overdue reunion from the side. The friends then began working the stage as if they had not spent any time apart. Even after Beenie Man’s exit, the collaboration continued with Samini, eventually declaring that it felt good to be back as they finished a twelve-minute set stage together. 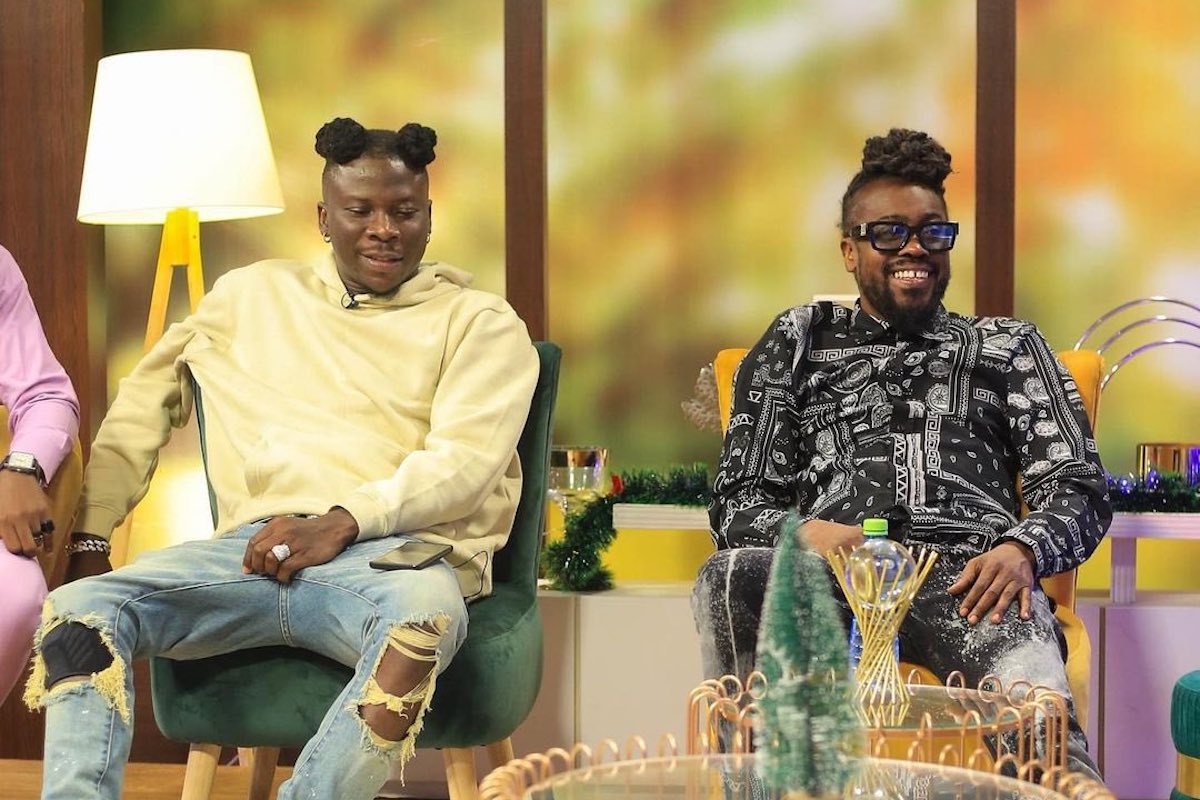 Beenie Man touch down in Ghana for Bhim and gets the VIP treatment from Stonebwoy.

The Jamaican dancehall legend proclaimed as the King of the Dancehall is set to rock the stage in Ghana for the return of the Bhim concert set for December 21 at the Grand Arena of the Accra International Conference Center.
Beenie Man arrived on Monday and has been doing the rounds on various media platforms along with Ghanaian self-proclaimed African King of Dancehall Stonewboy, who he refers to as a son.
In an interview on Prime Morning Show, Beenie Man noted that Ghana was home to him as he prepared to perform on December 21.
Beenie Man Touch Down In Ghana For Bhim, Says “Stonebwoy Is My Son”
According to Beenie Man, the hospitality received by Stonebwoy was incomparable from the minute he landed in Ghana.
The King of the Dancehall also had high praises for Stonebwoy.
“When it comes to music, Stonebwoy is a genius, because he’s coming from the streets of this city and made himself one of the biggest artists from this city,” the dancehall artiste said. 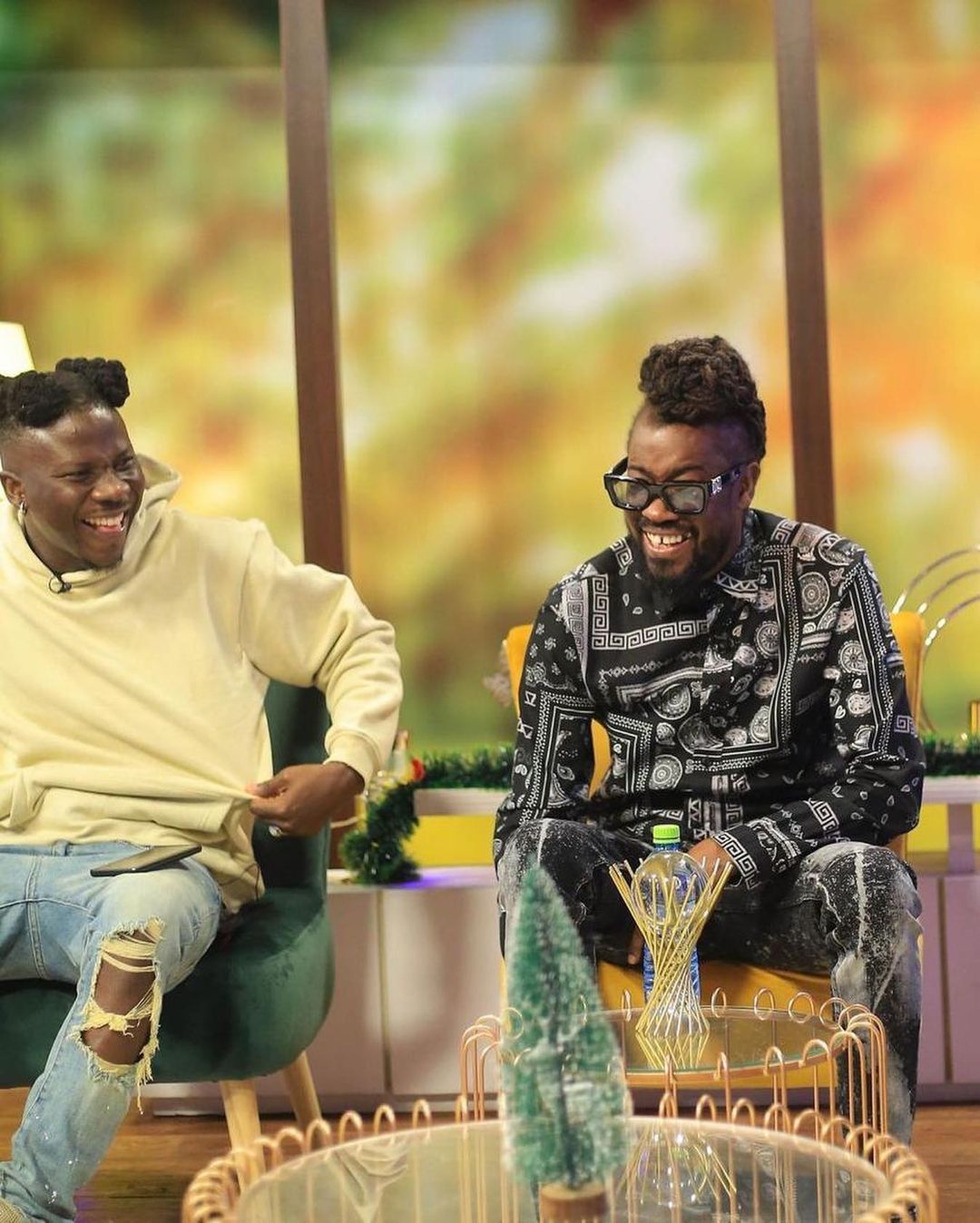 Beenie Man also spoke about dancehall music’s influence from Jamaica to Ghana and the broader African connection based on the Atlantic slave trade from Africa to Jamaica.

Meanwhile, Stonebwoy says the show will feature various Afro-Dancehall artists from several cities across Ghana, but they will also get their dancehall fill.

Stonebwoy also said Bhim, which is actually organized by him, is his own investment in the growing entertainment scene in Ghana.

“Over the years, we have seen the inflows of the shows in December, you’d find that people are interested and there is a lot of investment power in bringing- some big names…there was that energy of the influx of artists from across the globe to put us on that map but prior to that there hasn’t been much [investment] and you know behind the scene it isn’t easy. Here lies a case, instead of waiting on some investments or some investors, I always ensure that Ghana is still recognized on the map.” 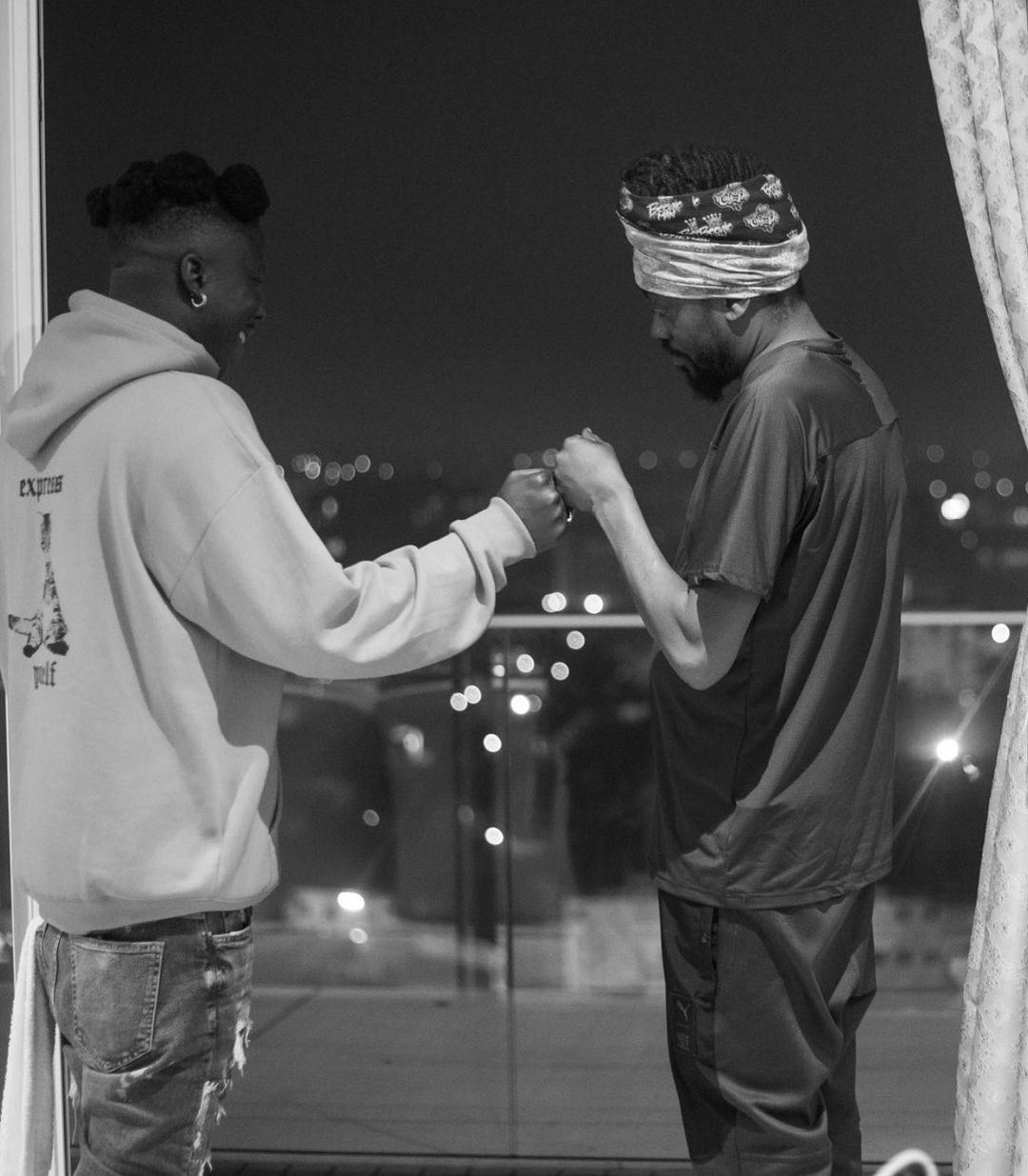 Meanwhile, Beenie Man called on fans to come out to the concert and bring only good vibes.

“If you know you will not be there to have fun, please stay home but all the same, it will be a good night. Just as the name sounds ‘Bhim’ means ‘be in’ so you can’t miss the Bhim of Hope Concert.”

Beenie Man and Stonebwoy have a song called “Shuga,” and Beenie Man says the Ghanaian was among the first African artistes he worked with.

“Stonebwoy is my son, also a brother, a companion and we have a good working relationship,” Beenie Man stated.

Stonebwoy added, “Yes, that’s right. I heard of him and gained interest in what he does when I was age 17. I used to watch him on the screens and it’s a good feeling that we are here today.”

Meanwhile, there could be more new music for Afro-Dancehall fans as Stonebwoy teased future collabs.

According to a statement from Stonebwoy’s team, the Bhim Concert is geared at exposing Ghana’s entertainment and music landscape. The Afro-Dancehall artist recently completed a three-city tour in the United Kingdom, performing at the O2 Academy Islington in London, the Academy 3 in Birmingham, and the O2 Institute 3 in Manchester.