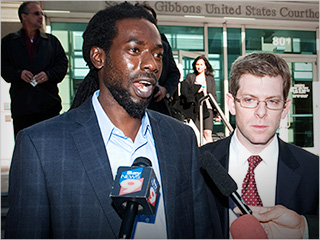 Buju Banton will remain in prison until the end of his sentence in February 2019 after signing a plea deal with prosecutors.

The US Attorney’s was pursuing a gun charge against the Grammy-winning reggae star that could see him get an additional 5 years on his sentence if convicted.

But the US Attorney’s Office on Thursday announced that they have reached a plea deal with Buju Banton and his attorneys that would see them dropping the gun charge in exchange for Banton dropping all attempts of future appeal.

In 2013, James Moody threw out the gun charge during a airing for one member of the jury that was accused of researching aspects of the case during the trial.

Buju Banton and his attorneys wanted a new trial on the grounds of juror misconduct, but the U.S. court of appeal threw out the case on the grounds that they do not have jurisdiction.

Following his 2011 conviction on drug trafficking, Buju Banton has filed several appeals and lost all of them.

He will be deported to Jamaica upon his release.