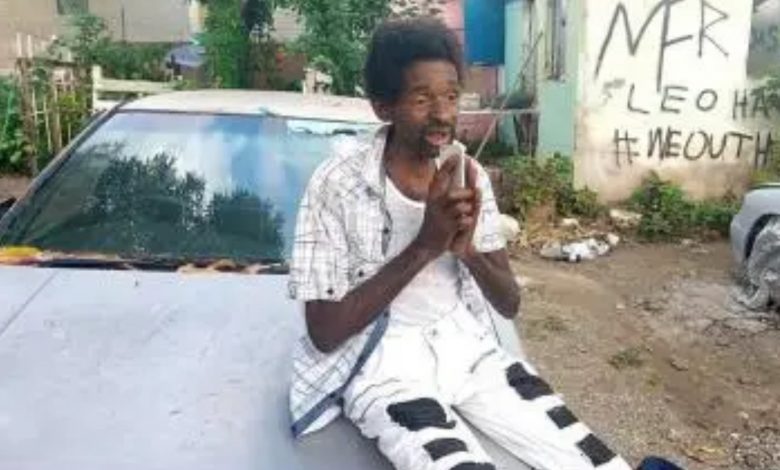 Veteran dancehall artiste Gully Bop who was admitted to the Kingston Public Hospital recently is currently going through trying times. Bop was released from KPH last Saturday however he had to be taken to the University Hospital of the West Indies, hours later.

While sitting on the hood of a parked car in a yard, Gully Bop talked to a reporter from the Jamaica Star, outlining that his “tripe buss”, he went on to explain that, “the doctor dem put a tube in mi side, and I have to wear a bag”. He also showed the opening in his abdomen.

Bop gave thanks to Ferron, the person who he called in the night to take him to the University Hospital of the West Indies to fix the problem with the colostomy plastic bag. “Him always deh deh fi me. Him have mi back. The first song mi sing, a him father produce it,” he said.

He also expressed that, “Gully Bop sick out bad man. Mi just want the people dem fi know that true mi look so mi nuh gone to the dogs. Cause sickness come to anybody. Round a month ago, one a mi sister and one a mi bredda bury. Corona kill one and cancer kill one. The third one a me, but nuh tripe nah go kill me, though.”

After explaining his health issue Bop concluded by outlining that he would be thankful but he is not going to beg for help, “mi nah go beg nobody,” he said.

The “Wuk Affi Mi” deejay spent one week at the KPH for a hernia and blocked tube complication which is causing him to feel a lot of pain and even be unable to urinate. According to Gully Bop, he had to be taken to the University Hospital of the West Indies because after he returned home from KPH and while feeding his dogs that were happy to see him, one jumped on him and ripped off the colostomy plastic bag that is used to collect faecal matter from the digestive track via an opening in the abdominal wall.