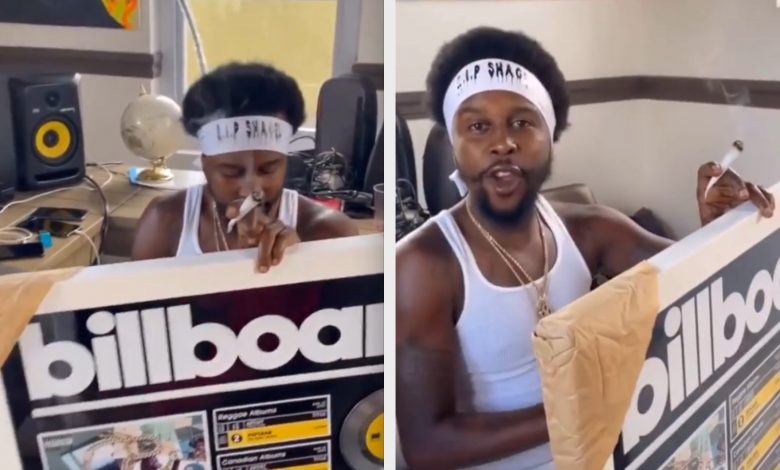 In a recent post made by the “Unruly Boss”, he shared a very proud moment with his fans as he and his “Unruly camp” producer and artiste Dane Ray unwrapped two billboard plaques of the Dancehall star’s last two projects “The Fixtape” and “Vanquish”.

In the video, it shows several songs from both of the artiste’s musical works being highlighted on the plaque, which is evidence that they have done immensely well.

The ” Vanquish project, was released in December of 2019, and featured songs like “Numbers don’t lie”, “Love you” and “Jah is for you” while the Fixtape which was released in August of 2020 and featured hits such as “Buzz”, “Fresh Polo” and “Twist & turn” featuring Drake and Party Next Door.

The recent Fixtape, definitely resonated on a different level with music listeners as it got Poppy, his first billboard top 200 feature and the deejay only seems to be going upwards since then.

In the same video the “Unruly Boss” posted, showed a YouTube gold plaque which is awarded to youtube accounts with over 1 million subscribers.

In the Instagram video, the entertainer whose real name is Andre Sutherland also sent his respects to Vybz Kartel, who mentored him from his early musical years until he was a success.

He also gave a loyalty shout out to “OVO sounds”, that he is currently signed to.

In the background of the video, the deejay had his hit “Gaza” track, “Dream” playing while he affirmed that what he previously referred to as his dream, have now become his reality.

In the midst of everything, when we look closely we can see the Unruly boss wearing a headband which says “R.I.P Shagel”.

Check out the viral video below.