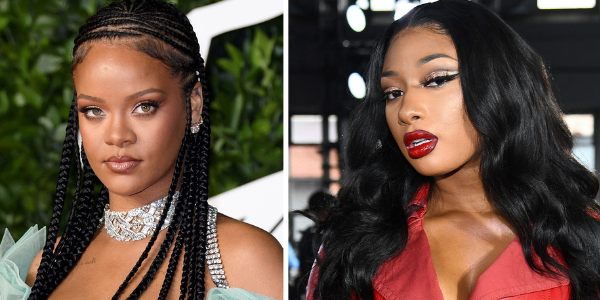 It has been discovered that the iconic singer, fashion designer and actress Rihanna has unfollowed Megan Thee Stallion on Instagram.

This brought about more speculations if this was an innocent unfollow or if something was actually amiss. After a thorough investigation was conducted by Empressive it has been revealed that Rihanna also removed Megan Thee Stallion as her brand ambassador from her Savageex Fenty website.

This is discovery has awoken questions as to what really happened between Rihanna and Megan. There hasn’t been any suspected reason to explain why Rihanna would fire Megan, especially since Megan had a large platform and a broad influence.

Previously, Rihanna had been showing great support to Megan, especially after the shooting incident in which Tory Lanez allegedly shot Megan Thee Stallion.

During the controversy that emerged from Megan going public with the incident, Rhianna fired Draya Michele, American media personality, model, actress, and fashion designer, for making a bad joke about the situation and signed Megan as her ambassador. Additionally, Rihanna sent Megan flowers showing support and Megan was invited to Rihanna’s Diamond Ball where the two were seen conversing.

Rihanna was obviously in full support of Megan and they are both signed to the entertainment agency Roc Nation. The two ladies have been seen together at events taking pictures and interacting, but somehow something changed because Rihanna seems to have cut ties with Megan Thee Stallion.

Speculations have been made by Empressive that Megan’s deal with Savageex Fenty expired or she could have received another deal with another lingerie line or it was quite possible that Megan was in a great place in her career, receiving bigger endorsements so she felt like she didn’t need to be sponsoring Fenty.

According to rumours, many famous and iconic persons in the industry have been silently unfollowing Megan Thee Stallion. It is rumoured that these persons might have stumbled upon a hidden detail regarding the case with Tory Lanez.

While there is no certainty what is happening, many persons are keeping their eye out for some shocking revelation whether or not it is related to Tory Lanez. In the past, Rihanna is only known to cut ties with celebrities or social media influencers when they get involved with controversial mess relating to domestic violence like Draya Michele and American model/social media influencer Ari Fletcher.

This shocking news was discovered by Twitter users who shared the screenshot showing that Megan Thee Stallion’s name was no longer in Rihanna’s 1,581 following list.