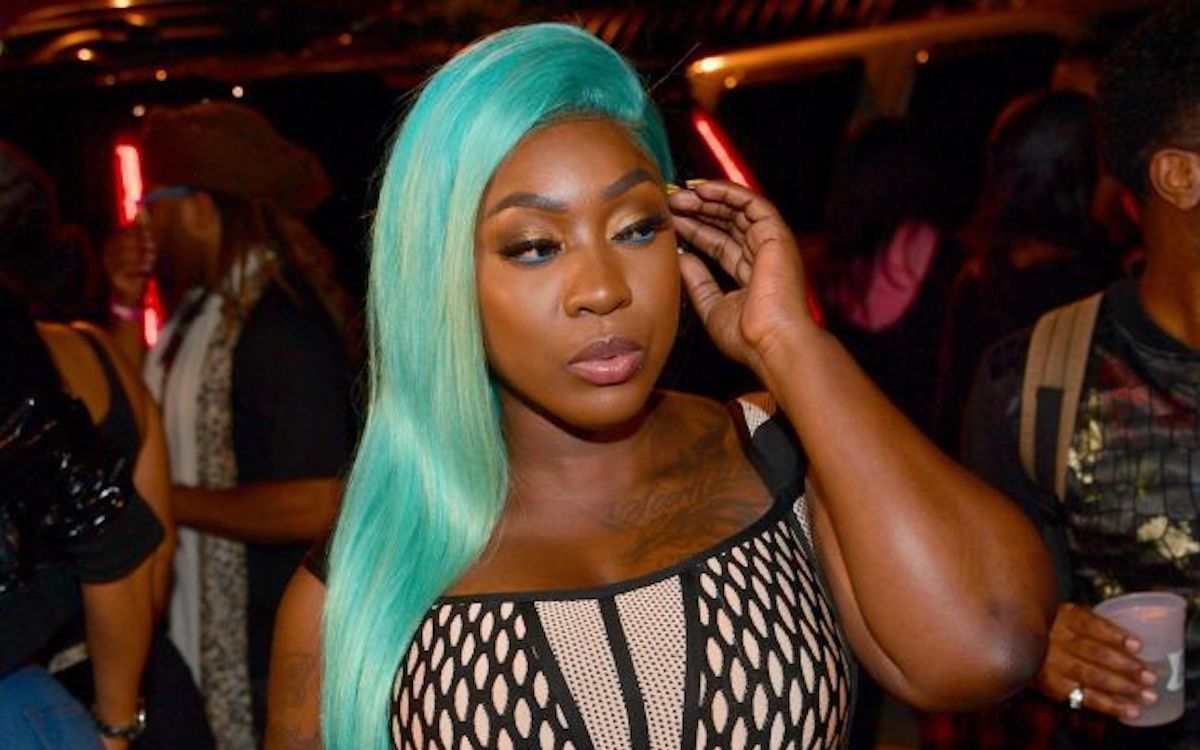 Foota Hype remains defiant in the face of Spice ultimatum.

While many applauded dancehall queen Spice for her recent announcement that she would be performing at an upcoming Gay Pride concert in Toronto, Canada, next year, not everyone saw it as a step in the right direction. Dancehall selector turned social media commentator, Foota Hype took to Instagram to vent his frustration as he said her statement left him “completely defeated, ashamed, embarrassed, weak and betrayed.”

This and the other subsequent posts from Foota, which also declared that Spice wasn’t working out as the Queen of Dancehall, saw Spice issuing an ultimatum in the early hours of Friday, November 19, for him to retract what he said within the next 24 hours.

Coincidentally,Foota Hype FO added more fuel to the already burning pot of fire by taking to social media again on Friday morning to express his disgust about Spice choosing to assonate with the LGBTQ concert, which is said to be one of the biggest festivals internationally. Foota stated, “I was hoping that no matter what, @spiceofficial would never give in to something like this. I guess I was dead wrong. This is a big ‘L’ for the ancestors of Jamaica and the music given to us by the almighty.”

Not satisfied with just that post, hours later, he was back urging Spice to give the organizers back their money and forget about the festival. Hype then accused her of letting her ego override her common sense as he claimed that she was doing the concert to gain acceptance on the wider international market and cover up her insecurities about her skin color.

Foota Hype declared, “Me know it hurt when the international market nah gi you the respect and glory you deserve tru you nuh look Spanish or close to white like @shenseea dem and dem still nah go gi u. Don’t lose uself trying to win that battle, do not destroy dancehall morality to please ur insecurities. It is not too late to cancel the show and save your integrity and your career.”

But while Foota has been scathing with his attack on Spice, except for mentioning his name, he has not spewed the same level of venom at Bounty Killer and chalked it up to being “disappointed” in him. The ‘Go Dung Deh’ singer is set to participate at the Toronto Pride Festival in June 2022 and has tweeted about her excitement to not only be included on the line-up of popular artistes but one of the major headliners. Since Foota’s recent viral rant, Spice, whose real name is Grace Hamilton, responded in a quick video asking fans to pass on her message to him.

Explaining that she was busy and would address it in detail later, Spice stated, “Tag Foota cause everybody have him number and tell him Spice a give you 24 hours to just delete the post, finish with it and move on and we just have a merry Christmas.”

Less than an hour later, Foota clapped back, stating that he would not be deleting any posts, so she was free to spill any tea she felt she had on him as he was not backing down or apologizing for his previous statements.

Peppered with the laughing emojis as if ridiculing how preposterous her demand was, Foota declared on his Instagram, “It look like the dread gi Spice the wrong weed fi smoke. Mek me speed up the process. Me nah delete nutten so 24 hours too long. Let’s go. Talk wey you know bout me, spill the tea please. Just keep in mind is not a trainee yah ramp wid and me know u looooooo ready up.”

“Soon remove this Caption but I Don’t discriminate,” Spice wrote. “I love all my fans no matter what race or their sexual preference, it’s not my decision to make. So you’re upset because I’m performing at a pride event when you’ve been working for different pride organizers all your life ? Well I’m very sorry but my music does not stop at your big stinking foot. I never told you I wanted to be white or Spanish looking I’m extremely happy just the rich way I am, so stop the madness, You knowingly have lesbian and gay friends, that you and I both know, so I’m confused at this hypocrisy. The amount of your male Artist friend that you have that have girls kissing girls in music videos and singing about 3 sums, it wasn’t homosexuality then or ruining the culture ? Or is it only homosexualilty when it’s not pleasing you ? All I want is for you to just make everything make sense or is it only when a “SPICE” unu have a problem.” 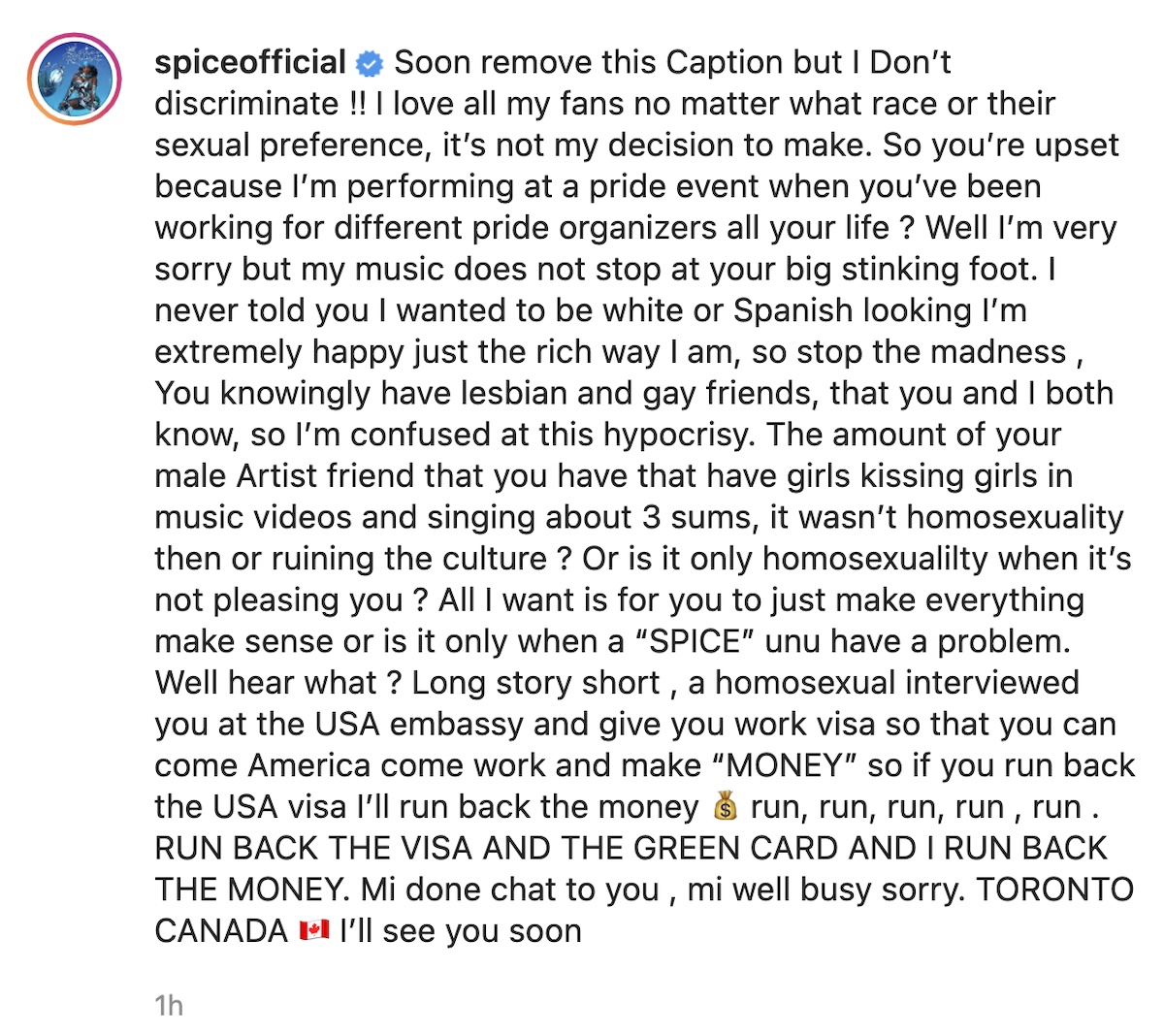 “Well hear what ? Long story short, a homosexual interviewed you at the USA embassy and give you work visa so that you can come America come work and make “MONEY” so if you run back the USA visa I’ll run back the money run, run, run, run , run . RUN BACK THE VISA AND THE GREEN CARD AND I RUN BACK THE MONEY. Mi done chat to you , mi well busy sorry. TORONTO CANADA I’ll see you soon.”