If you’re into your guitars, then you’ll know they can get pretty expensive.

Better quality wood, pick-ups and strings, plus build quality and craftsmanship, all add up as you start to climb the ranks in the guitar world.

However, you’re not going to find any of these guitars in your local guitar shop, that’s for sure, as they’re the most sort after on earth!

With guitars played by Rock and Roll legends like Jimi Hendrix and Eric Clapton, to one-off custom-designed guitars for Jerry Garcia; here’s a list of the 10 most expensive guitars in the world!

The 10 Most Expensive Guitars in the World

The list of guitars and figures mentioned below have been compiled from various sources around the web, such as Money Inc, String Joy & Guitar Player.

These are the 10 most expensive guitars in the world:

Jerry Garcia was the lead guitarist for Grateful Dead. He played his custom made Doug Irwin guitar for a full decade, from 1979 – 1989.

Its name, “Tiger” came from the custom painted tiger head Jerry had commissioned on the body of the guitar.

The custom Doug Irwin was the last guitar Jerry ever played in public; which is one of the reasons why it fetched so much at auction.

Jerry Garcia’s Custom Doug Irwin “Tiger” was sold at auction, by Guernsey’s auctioneer’s, in 2002 for $957,500, to Jim Irsay, owner and CEO of the Indianapolis Colts.

Next on the list is “Blackie”, Eric Clapton’s famous mashup of parts from three separate guitars.

The story goes that Eric Clapton decided to buy six guitars, giving one each to Pete Townsend, George Harrison and Steve Winwood.

Clapton then patched together parts from the remaining three guitars to create, “Blackie”.

It became his most famous guitar, recording with it in the studio and playing it at countless live performances.

Being the first-ever electric guitar that Bob Dylan played during a live performance, it goes without saying that this guitar has some major historical value.

It marked a time in history when his own fans actually booed him on stage, as they were not impressed with his choice of guitar.

They were used to acoustic versions of all of his songs, and they made sure to let him know when he came on stage at the Newport Folk Festival in 1965.

This performance and choice of a guitar by Dylan marked his transition into using more electronic instruments.

Because of who owned the guitar, and the story behind it; the 1964 Fender Stratocaster sold at auction for an impressive $965,000.

Keith Richards 1959 Les Paul is the seventh most expensive guitar in the world.

Standard 1959 Les Paul’s are worth in excess of six figures, without the help of a famous name, and to date, there’s not that many left knocking around.

However, this particular one was played by Keith Richards during the Rolling Stones debut performance on the Ed Sullivan show, which was a prominent moment in Rock and Roll history.

A lot of famous bands and artists owe some of their success to their spot on the Ed Sullivan Show, and collectors and memorabilia investors understand how events like this add significant value to items like Keith Richards 1959 Les Paul. 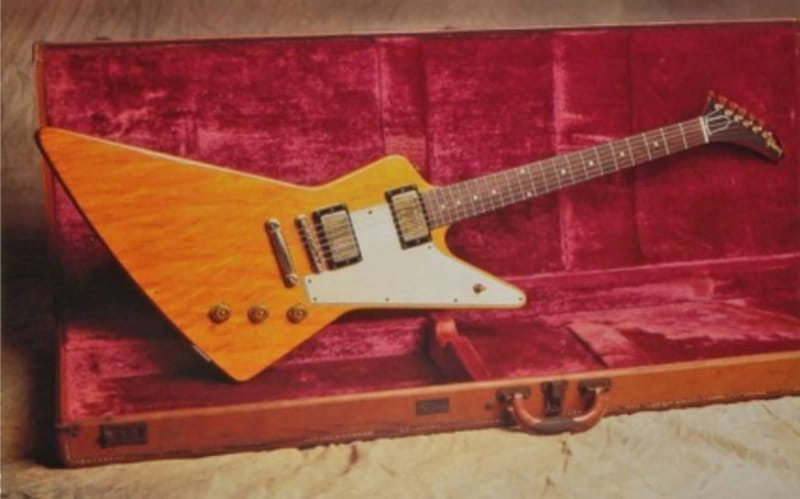 This 1958 Gibson Korina Explorers value, can be attributed to having been played by three of the worlds best guitarists.

Slash, Kirk Hammett and Rick Neilson all played this guitar at some point in their careers, which is pretty unique, to say the least.

Only around ten of these guitars were ever made, so when you combine the rarity and unusual shape of this guitar with its player history; it’s easy to see why it managed to fetch $1.1 million dollars at auction.

The 1958 Gibson Korina Explorer is the sixth most expensive guitar in the world. 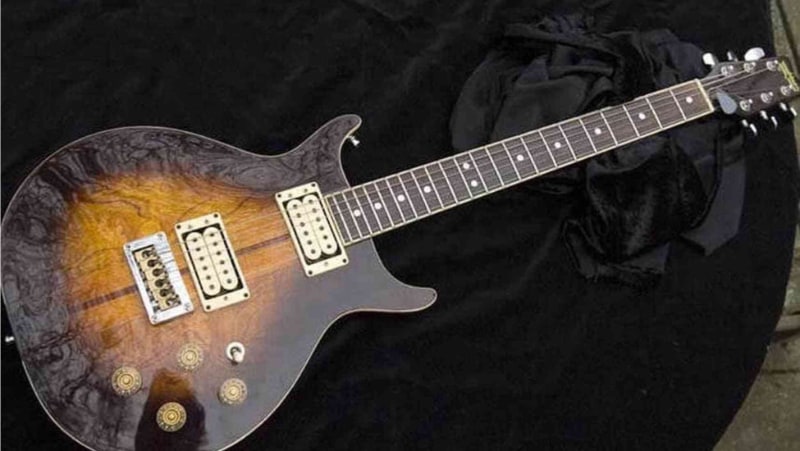 Coming in at number five on our list of the most expensive guitars in the world is Bob Marley’s, Washburn 22-Series Hawk.

Bob Marley, perhaps the most famous Reggae artist to have ever lived, only owned seven guitars throughout the course of his life.

One of those guitars was this 22-Series Hawk Washburn; which he gave as a gift to his guitar technician, Gary Clausen.

It’s rumoured that the Jamaican Government, which declared the guitar as a national treasure, purchased the guitar at auction for between $1.2 – $2 million.

However, the actual whereabouts of the guitar are still unknown to this day. 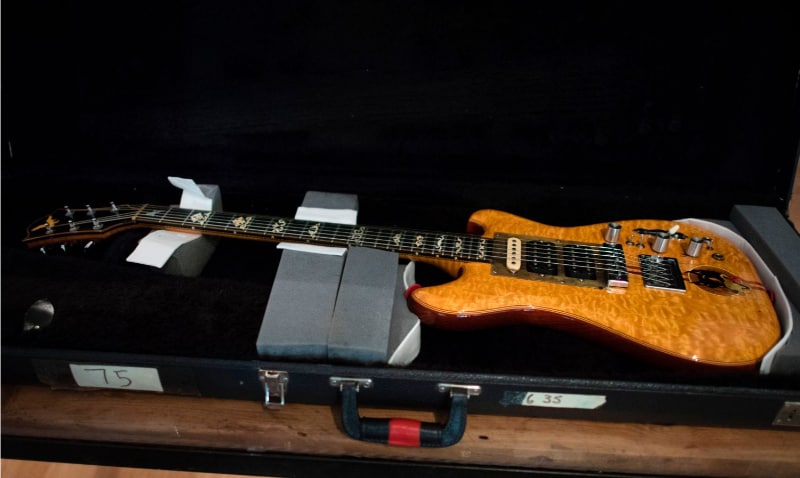 Jerry Garcia’s second guitar to be featured on our list of the world most expensive guitars is yet another custom Doug Irwin, nicknamed, “Wolf”.

Similar to his custom Doug Irwin, “Tiger”, its name derives from the custom wolf artwork on the body of the guitar.

The sale of “Wolf” was part of a fundraiser for the Southern Poverty Law Centre, and “Wolf” managed to sell at auction in 2002 for almost $2 million dollars.

Today, “Wolf” could be worth even more, depending on its condition.

The stock, right-handed Stratocaster with Olympic white finish is nothing special when compared to some of the other guitars on the list.

However, it was played by Jimi Hendrix at the 1969 Woodstock music festival; where his legendary performance of “The Star-Spangled Banner” took place.

Because of its unique history, Paul Allen, co-founder of Microsoft, purchased the guitar in 1998 for approximately $2 million.

It’s one of those things where you definitely would if you could!

The only acoustic guitar to make it on our list of the most expensive guitars in the world, had to be something special, and boy is it special!

John Lennon’s 1962 Gibson J-160 E electric acoustic was one of a pair of almost identical acoustic guitars; purchased by John Lennon and George Harrison in London in 1962.

It was used to co-compose, with Paul McCartney, Beatles songs like, “I Saw Her Standing There” and “She Loves You”.

After the Beatles performed a gig in 1963, the guitar somehow managed to disappear and was presumed lost, but later resurfaced again several years later.

From its initial purchase price of £161 in 1962, the acoustic guitar went on to sell at auction in 2014; to an anonymous bidder, for a jaw-dropping $2.41 million dollars.

1. “Reach Out To Asia” Fender Stratocaster 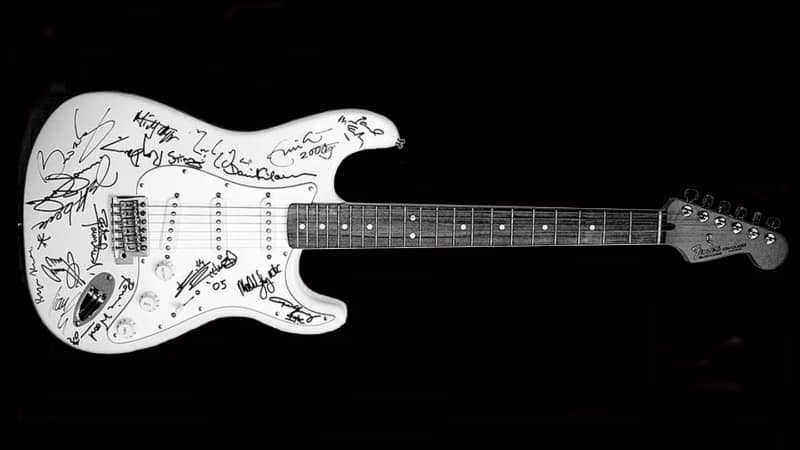 The title of the most expensive guitar in the world goes to the “Reach Out To Asia” Fender Stratocaster, which sold for $2.7 million in 2015.

This guitar was the result of Bryan Adams “Reach Out To Asia” project; which was set up to help the victims of the 2004 Indian Ocean earthquake and tsunami. Which killed an estimated 230,000 people across 14 countries.

The guitar is unique because it has some of the most famous rock stars signatures inscribed all over its body.

“Reach Out To Asia” sold at auction in 2015, by Sotheby’s, for $2.7 million – making it the most expensive guitar sold in history!

We hope you enjoyed our list of the 10 most expensive guitars in the world.

It seems like, as with most memorabilia or collectables, previous owners, significant dates and events and unique custom designs play a massive part in the valuation of such items.

With guitars, it’s certainly more to do with who’s played, performed and recorded with them more than anything else.

You’re buying a part of history and someone’s story, which, depending on significance, is arguably almost priceless!

Here’s a quick recap of the 10 most expensive guitars in the world.