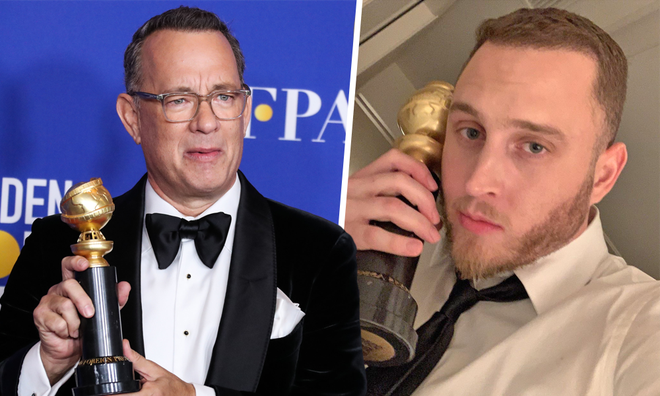 The Golden Globes aired on Sunday night, and among the surprises of the night that included an appearance from Beyonce and JAY-Z, the rapper son of actor Tom Hanks gave an inexplicable presentation in Jamaican patois. The artiste who goes by the name Chet Haze but, more recently, just Chet Hanks, was on the red carpet at the prestige award show when he told viewers to stay tuned in an extensive paragraph all in some offbeat version of Jamaican patois. Though it was not bad for an international, I guess?

Chet’s dad, Tom Hanks, who was honored with the Cecil B. DeMille Award at the 2020 Golden Globes, arrived at the award show with his entire family. Following an interview on the carpet before the show, Chet turned left a strange “stay tuned” message for viewers when he broke out into an accent and dialect that was not his.

Social media has been reacting, and fans have had mixed reactions about the rapper’s foreign accent outburst. While some find it offensive, others were amused and even complimented the effort. “Shabba Hanks,” one Instagramer wrote. Another said, “It actually wasn’t too bad. Better than I can do.”

A curious fan posed the question of if Chet’s mimic was “offensive” while a more light-hearted fan wrote, “Everyone but Jamaicans are pissed about this lmfaoo.” The majority of the feedback has been quips that call for a healthy laugh. “Yo who dropped extra jerk seasoning on his snapper,” a fan wrote